SKANDINAVISKA PIPFABRIKEN – SKAPI
SKAPI was founded in Uddevalla in 1936. Its origins are found in Cologne in Germany, where a man named David Schwab founded a pipe-factory in 1811. That factory was very successful and soon it had several hundred of employees. In 1929 a collaboration with an English pipe-factory started (which factory is unknown) and in 1933 this factory took over the whole production. When World War II started, the German government confiscated the factory, which, during the Allied bombing of Cologne, was completely destroyed.

Max D. Schwab, who founded SKAPI, belonged to the third generation of pipemakers in the family. The political developments in Germany in the 30s made him move to Sweden and he decided to found a pipe-factory here. Due to what happened, it obviously was a wise decision. 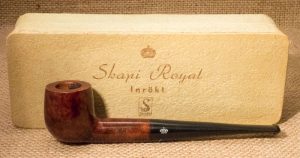 That Schwab decided to start his factory in the city of Uddevalla was due to the economic crisis in the country, a crisis that to a large extent affected that part of the country – there was plenty of labor available. In autumn 1936 he began on a modest scale in a basement. The start was laborious. The workers had to be trained from scratch and, moreover, the duties on raw materials were so high that they hardly differed from the duties on finished pipes. However, Schwab managed to have that changed during a meeting with the Minister of Finance, Ernst Wigforss.

One of the factory’s selling points was that the pipes were “smoken-in”, which was unusual at the time. The tobacco hole was treated inside with a paste, invented and patented by General Axel Klingenstierna.

The factory prospered and had to move to new premises, which soon also became too small. In 1945 a completely new factory was built, which was ready for use in 1946. In connection with that they also started a metal workshop. The intention was to become as self-sufficient as possible.

The war was a hard period for most pipe-factories, as it was difficult to get hold of briar. SKAPI, however, was unusually lucky and had a sufficient stock of raw material most of the time. But during the final stage of the war, even they were short of briar and had to use other types of wood such as pear and cherry. The best results were, however, reached with birch. Experiments were made with a special preparation method that hardened the wood from burning and the result was claimed to have been successful.

SKAPI made pipes in a lot of shapes and they also developed systems pipes and pipes with heads of various compressed material. I have no definite information about when production ceased, but it probably was in the late 60s.

SVENSKA PIPFABRIKEN
This factory was situated in Lerum and it is slightly older than SKAPI. It was founded in 1931 by Gösta Eliasson, who at the time was only 19 years old. He had ancestry in the tobacco industry, as his father owned a cigar shop in Gothenburg.

Gösta Eliasson learned the trade in Switzerland. His factory was never as great as SKAPI (at most, it employed about 20 people), but it survived longer and its pipes had a very good reputation. Among others they made pipes for fine tobacco-shops like Brobergs in Gothenburg, Pip-Center in Västra Frölunda and Pibe-Dan in Copenhagen.

Like SKAPI they had problems with raw materials during the war. Svenska Pipfabriken made no pipes from birch, instead they used pear wood. It is curious that none of the Swedish factories used beech, which in Denmark was the most common substitute for briar.

The factory was sold in 1979 and closed a few years later. All the time it was run by Gösta Eliasson (who died in 1989) and his wife Lilian.

Svenska Pipfabriken’s pipes were mainly classical. They had no special name, it was mostly left to the customer to determine that. The names I have seen are CENTER, PEARL, BLACK JEWEL and CROWN JEWEL. All pipes were stamped “Made in Sweden”. They made smooth pipes in natural color (virgin pipes) and dark-stained, sandblasted in black and tan and also rusticated pipes. The pipes I have seen, have been of a high quality.

It is more difficult to find any information about this factory. In a brochure, published in 1988, it is said that Skånska Pipfabriken manufactured pipes until World War II started, but that the company has since been dormant. Now (1988) they wanted to resume production, marketing pipes and accessories.

The brochure is elegant and lavish, in full color and with pictures of lots of pipes. The pipes are namned LIRO. There is also an address and a telephone number to a sales office in Malmö, and the factory is said to be situated in Hyllstofta. However, the telephone numbers are no longer in use.

Hyllstofta is not far away from where I live and I know that pipes were made there long ago. I learned that at a local history exhibition, when a pipe made in Hyllstofta was shown. It was made during the war and the wood was beech. But I could not get any more information about it.

The pipes in the brochure are most certainly not made in Hyllstofta. I think they were made in Italy, possibly they have got the final finish here in Sweden.